Like many holidays, St. Patrick's Day has several different symbolical icons.  We talked about the Shamrock HERE.  Today, let's look other symbols.


Leprechauns
The name leprechaun, from the old Irish wor luchorpan, means little body.  A Leprechaun is an Irish fairy who resembles a tiny old man about two feet tall.  He is most often dressed like a shoemaker.
According to legend, leprechauns are aloof and unfriendly.  They live alone and spend their time making shoes and guarding their hidden pot of gold. 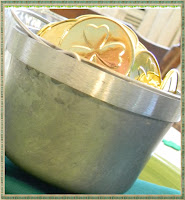 Harp
For centuries, the harp has been a symbol of Ireland.  The ancient musical instrument played an important role in the social structure of Ireland.  Harpists, often blind, occupied an honored place in Irish society.
Although it is not as recognizable as the Shamrock, the harp is a widely used symbol appearing on Irish coins, the presidential flag, state seals, uniforms, and official documents.
Celtic Cross
Saint Patrick's days as a young man enslaved in Ireland helped him when he returned to introduce Christianity to the Irish.  Because of that time, he understood the Irish language and culture.
He was successful in converting the Irish to Christianity because he didn't try to make them forget their old beliefs.  Instead, he combined their traditional beliefs with the new beliefs. 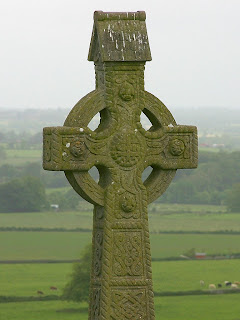 The Celtic Cross is an example of this blending of traditions.  Saint Patrick added the Irish symbol, the sun, to the Christian cross making it more natural for the Irish.

Claddagh
The Claddagh is worn as a token of love.  Galway has produced Claddagh rings since at least 1700.
The elements of this symbol correspond with the qualities of love(heart), friendship (hands), and loyalty (crown).
Claddagh rings may be worn as a friendship, relationship, eternity, engagement, or wedding ring depending on the intent of the wearer or giver in the event that it is a gift.
Traditionally, there are three distinctive and acceptable ways to wear a Claddagh and signify the wearer's relationship status:
Finally, there is the St. Patrick's Day symbol that I think is likely more rooted in American tradition than that of the Irish.  Still, it is a very recognizable symbol of this fun holiday.
MAKE IT A GREAT DAY!
Posted by La at 11:45 AM

Email ThisBlogThis!Share to TwitterShare to FacebookShare to Pinterest
Labels: holidays