Blast from the Past: Silly Putty v. Play-Doh

Ever notice when an idea is successful, there is suddenly an onslaught of similar ideas? For instance, look at how many reality shows are on TV since Survivor first became a hit. The other shows are based on the same premise but with a different twist.


When I started researching topics for the Blast from the Past Series, I noticed that many times there were people, places or things that were similar, but different. This is one of those things that makes you say, hmmmm (Arsenio Hall reference).

Today’s topic: Silly Putty or Playdoh?
Silly Putty is plastic putty sold in a plastic egg-shaped container. It was developed by Janes Wright, a GE engineer. Originally name Nutty Putty, it was resistant to rot and it was soft and pliable. Silly Putty can stretch many times its length without tearing and it bounces nearly 25% higher than a normal rubber ball. The best attribute is that it can copy the image of any printed material that it is pressed upon. It was first sold under the trade name of Silly Putty in 1949 and sold faster than any other toy in history with more than $6 million in annual sales. 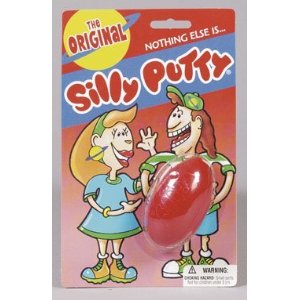 I so wanted Silly Putty when I was a little girl,
but my mother always said no.
Poor La.

Play-Doh was first tested six years later after development by Noah and Joseph McVicker who then founded Rainbow Crafts to start manufacturing their product in Cincinnati, Ohio. The original compound came only in off-white, but by 1957 came in yellow, red, and blue. Pay-Doh is similar to regular modeling clay, but without the toxicity or mess. 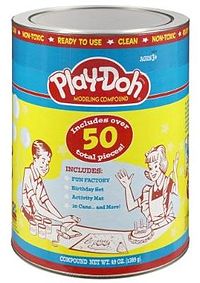 Mom did allow me to have Play-Doh. Lucky La 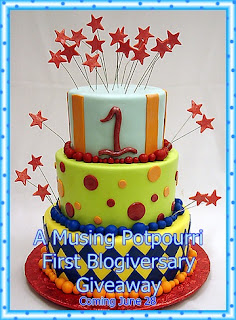 Come back Wednesday for another peek into my
One-Year Blogiversary Giveaway Package!
MAKE IT A GREAT DAY!﻿
Posted by La at 7:00 AM