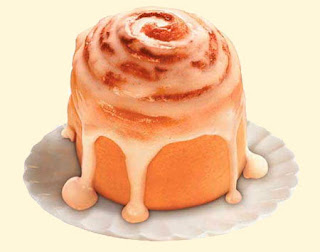 Did I tell you our Weight Watchers meeting is located in the mall near a famous cinnamon roll vendor? It’s a weekly test of my fortitude, a tortuous one at that. There’s nothing like walking into a meeting already hungry, because no one eats just before weighing in, and smelling the comforting, tempting, and sweet aroma of warm cinnamon rolls.

Let’s face it. Hunger did not pack the extra pounds onto my body. It was the CRAVINGS! As much as I’d love to dive into a warm cinnamon roll, the 813 calories (18 Points) serve as a pretty effective deterrent.

This morning, I found a very satisfying alternative, the Cinnabomb (It’s da bomb). 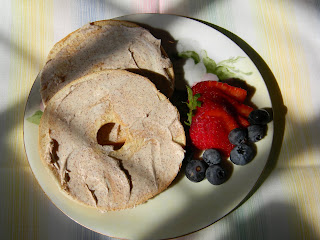 Lightly toast the bagel thin. You want the bagel to be warm, but not crisp. Evenly divide the cheese spread between the two halves. Sprinkle the tops with half a packet of sugar substitute each followed by a sprinkling of cinnamon. Swirl the toppings together.

The result? No more famous cinnamon roll cravings for me and at 170 calories (2 Points), the Cinnabomb fits nicely into my meal plan.